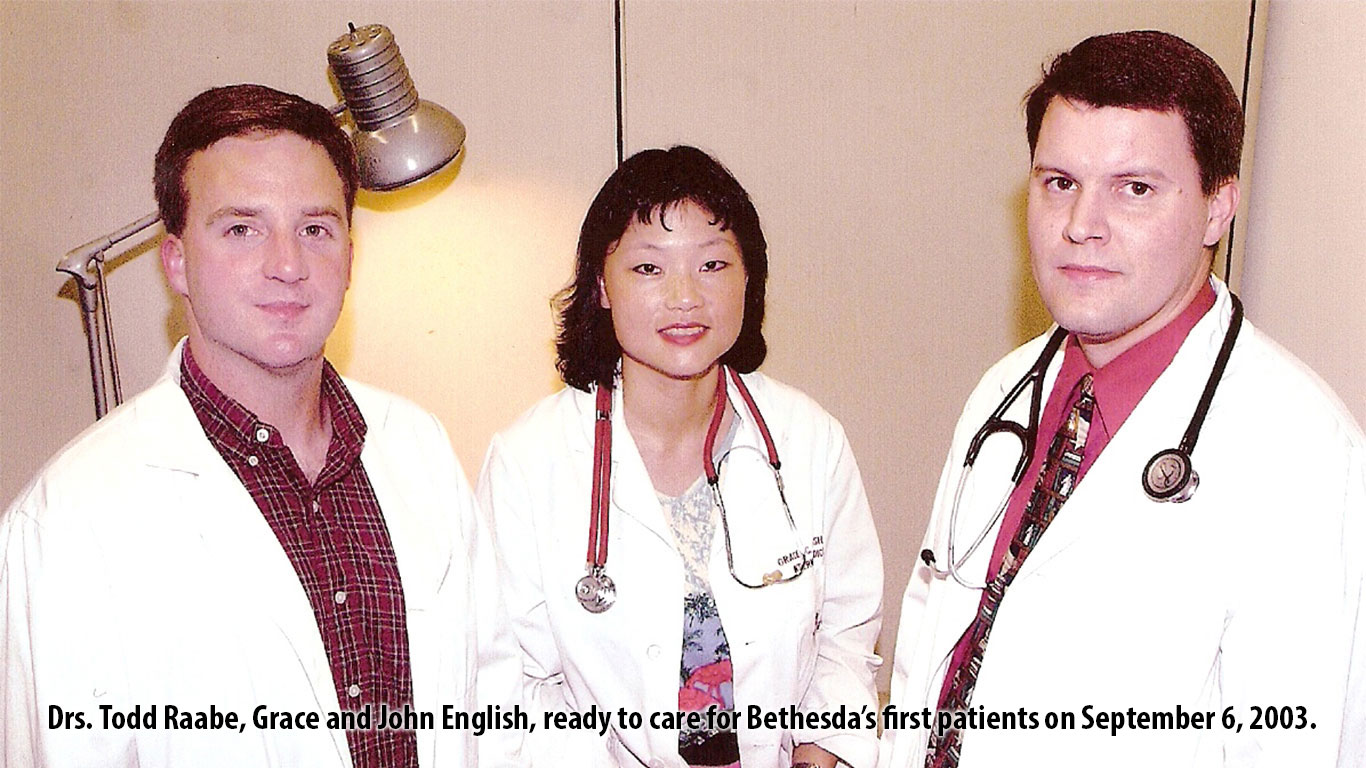 The idea for Bethesda was born in 1999 when Dr. Michael Massar, Pastor of the First Baptist Church in Tyler, Texas, received a call from a local physician who was interested in setting up a community clinic at the church.

Dr. Massar was inspired to help and soon reached out to other clergy in the area to see if they were interested in a more ambitious idea–a multi-congregation, shared health ministry. Years earlier, a parishioner named Porter Skidmore had donated an 11,000-square-foot building to First Baptist, and this could serve as the home of the ministry.  A steering committee and board were formed, and they agreed to move forward as quickly as possible by renovating a 3,000-square-foot area in the Skidmore building. Donations of furniture, lab equipment, supplies and money poured in, and Bethesda opened its doors on September 6, 2003. Two doctors and four nurses were on duty.  Thanks to the generosity of early contributors and a sizable gift from an anonymous donor, remodeling continued and the clinic expanded its capacity dramatically. By the end of 2004, the clinic had logged nearly 4,800 patient visits.

In 2015 the clinic once again underwent large scale remodeling. The David F. Nichols, DDS dental clinic came into being and expanded dentistry capacity greatly with the addition of two dental chairs and a hygienist chair for a total of 5 dental spaces. The Harold B. Cameron, MD medical clinic was formed and several additional exam room spaces were created to increase our capacity for primary care patients and some specialty visits – including a staff gynecologist available for Women’s health services. More administrative office space was added as well by taking in the former front porch.

Increased accessibility to care for patients in need of mental health services was expanded in 2019 with the addition of an on-site counselor who sees patients each week.

In 2020 Bethesda will celebrate 17 years of successful operation. Since its inception, the clinic has served more than 11,000 patients and completed more than 125,000 patient visits.

HOW YOU CAN HELP

Gifts from donors like you enable hardworking, low-income people in the Smith County area to have access to affordable health care. You can DONATE TODAY from this website, send a check made out to "Bethesda Health Clinic" to 409 W. Ferguson St., Tyler, TX 75702, or by emailing Diane Thomason at dthomason@bethesdaclinic.org to learn about other options.

There are many ways to give to the future of Bethesda Health Clinic, and gifts of all sizes are welcome. You may designate your gift for general purposes or for a specific area of the Clinic’s work. You may make your gift all at once or you may pledge it over time. You may make an outright gift today using almost any type of asset, or you can make a gift later through a bequest or other planned gift.

Bethesda Health Clinic holds two fundraising events each year, Dr. Luke and the Birthday Bash. Sponsorships are available for both the these events. If you are interested in sponsoring an event, please contact Diane Thomason at dthomason@bethesdaclinic.org.

Bethesda Health Clinic partners with many skilled volunteers in the community to deliver healthcase services to the neighbors we serve. Volunteer opportunities may be available in an area that may be of interest to you. These areas include Admissions, Front Desk, Medical professional, Dental professional, Document processing and more. For more information or to apply online, click here.

The purpose of the Bethesda Alliance is to support and promote the Bethesda Health Clinic of Tyler, Texas by functioning as a fundraising and volunteer service group.

To become a member, contact the Alliance president by emailing alliance@bethesdaclinic.org.

To see more patients, Bethesda Health Clinic is open on some Saturday's fully staffed by members of a Tyler area church. If your church has doctors, dentists, nurses and administrators as members, talk to us about hosting a Saturday Clinic.

DONATE TO HANGERS OF HOPE

Your donations to Hangers of Hope Thrift Store support your friends and neighbors who are patients at Bethesda Health Clinic, and they also support people in developing countries.  Hangers of Hope has two donation centers, at our Superstore located at 920 WSW Loop 323, Tyler TX 75701, and at our Highland Village store located at 3826 Troup Hwy, Suite J, Tyler, TX 75701. Our friendly donation center staff will gladly unload your donations from your vehicle.  Drop off Times are: Monday-Saturday 9am-5:30pm.  For more information visit hangersofhope.com.

SHOP AT HANGERS OF HOPE